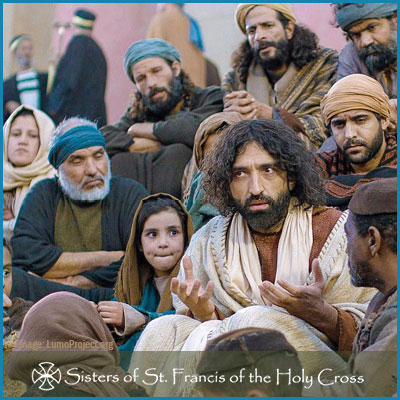 The wise words of our Teacher

“Repent, for the kingdom of heaven is at hand,” are Jesus’ words to us this Sunday. In the longer version of this reading we hear how Jesus began assembling his apostles, the first of whom were Simon Peter, Andrew, James and John. When called, they immediately stopped fishing and began following Him.

As JESUS used the word, "repent," its meaning - from the Greek word, "metanoia," meant "to turn one's heart and mind," as in "to have a change of mind/heart." This "turning" was an inner work of Spirit, who initiates a sorrowed and regretful heart for the coldness, hard-heartedness, indifference, lack of care and concern for others in our lives.
"But this original meaning as seen in the Classical Greek began to see change. In the Old Latin and Latin Vulgate "metanoia" was translated as "paenitentia" which came to mean penance or acts of penance that had to be done if one hoped to obtain grace."
If today's Church can get to a place of both INNER contrition - "a sorrowed, contrite, and turning heart," to an OUTER manifestation of such by turning our hearts and minds and ENERGIES/WORKS to the needs of today's poor and suffering, lonely and rejected, abused and oppressed, I think we would be much closer to realizing "the kingdom of heaven," as JESUS knew it and meant it. That is my prayer for our 'repentance' today.
http://www.metanoiaministries.org/Historical.html

As we reflect on the light of Christ piercing the darkness, and on our called to live in the light, I think of how I need to be and what I need to do as our country accepts a new president. Jesus is my example of living nonviolently and I need constant conversion to do the same.