A reflection on Saint Clare as a foot washer 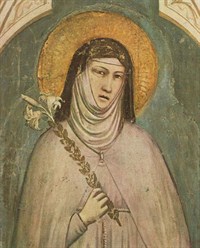 There is no more dramatic scene apart from the Passion than that of the washing of the feet in the Gospel of John:

"Do you understand what I have done to you?"
was one question that Clare was able to answer with conviction.
She spent herself in the service of her sisters
and was an example of all that was embodied in the image of Jesus as foot-washer.

Clare rarely gave an order, instead she would do things spontaneously,
preferring to do things herself rather than ordering her sisters.
She frequently and reverently washed the feet of the serving sisters
who returned from outside and, after washing them, kissed them.
Clare's foot-washing ministry became the central metaphor for humility and service.

I recall a visit to the hospital after one of our seniors, Carl, suffered a massive heart attack.
In his last hours, his wife and six children washed his feet
with a hospital basin of water and dried them with hospital towels.
They did this in faith and prayer as a symbol of his life lived in humility and service.
He served as husband, pastoral council member, trustee and catechist for 53 years.
Carl hoped that all the members of the parish community could be foot-washers,
serving generously in humility.
He understood that Christian leadership always needs to be an act of foot-washing.

I would rather wash feet than get my feet washed.
Yet, I know, that letting someone else bend low
in front of me, like Clare, causes me to gaze, consider and contemplate.
I am inspired to imitate Jesus and Clare in this reverent act of service.