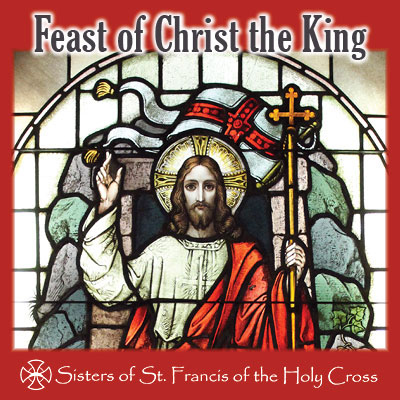 At the end of the First World War, Church leaders saw a rise in secularization and nationalism across Europe. In response, Pope Pius XI issued his encyclical letter “Quas primas” (“In the first”) which instituted the Solemnity of Our Lord Jesus Christ, King of the Universe, more commonly known as the Feast of Christ the King. We celebrate this feast on Sunday, marking the end of the Church year.

In his letter, Pope Pius instructed the faithful to let Jesus “reign in our minds … our wills … our hearts … our bodies.”

In the year 2000, NCR's chosen contemporary version of the Face of Christ was a young black man, whose crown of thorns sat upon his head of dreadlocks. That image remains much more powerful to me than a traditional image, especially one that makes JESUS [and the entire Risen CHRIST] a white male.

I also have a painting of the Face of the Thorn-Crowned Christ, with images of contemporary prophetic witnesses filling up the FACE [Body] of CHRIST. Faces like Gandhi, Dorothy Day, Mother Teresa, MLK, Jr., Thomas Merton, Oscar Romero, etc., etc. For me, that says more about CHRIST and the reign of truth, justice, freedom that make up TRUE COMPASSION [for ONE-and-ALL] that resides in and emanates from the Heart-and-Spirit-of-CHRIST.