Sisters to celebrate the doubling of their solar energy capacity

GREEN BAY, Wis. (Aug. 26, 2019) – A dream begun six years ago was realized today when the Sisters of St. Francis of the Holy Cross generate 50 percent of their electricity with solar energy.

The Sisters dedicated the panels and welcomed Bishop David Ricken who blessed the panels during a special ceremony at St. Francis Convent, 3110 Nicolet Dr., Green Bay.

“Lowering our carbon emission is one way -- and an important way -- we express our Franciscan value of caring for God’s creation,” says Sister Ann Rehrauer, Community President. “The effects of climate change aren’t being felt on the eastern and western coasts only; they are being felt here in Wisconsin so we want to do our part to lower emissions.”

In 2013 the Sisters began looking at renewable energy options. Their goal was to draw 50 percent of their usage at St. Francis Convent from a “green” form of energy. Even though gifts from generous donors and several grants were secured, the lofty goal proved to be cost-prohibitive; instead, the Sisters installed 416 panels (112 kilowatts) which have provided about 28 percent of the electricity used at the convent. Since the installation in spring 2014 the Sisters have saved about $60,000 in utilities.

Last year, the Sisters decided to apply for solar grants again and, if received, expand their solar capacity to 50 percent. Fortunately, RENEW Wisconsin’s Solar For Good program ($20,000), Focus on Energy ($58,932), and generous donors saw value in the Sisters’ project. The solar array was expanded by 280 panels (98 kilowatts) this summer, bringing the Sisters’ solar energy production to 50 percent.

Helping people understand how solar energy works has been an important component in this endeavor. The educational path created in 2014 remains open to the public. Visitors are invited to walk the path and see the panels up close. Along the path are seven plaques that explain how solar energy is produced, why it was chosen and whether solar energy is a good choice in a cold climate. The path is open from 10 am to 3 pm Monday through Friday from May to October.  All tours are self-guided; however, groups of five or more should call 920-468-1828 for reservations. Tour information as well as a 4-minute virtual tour and an hour-by-hour energy production meter are on their website's solar energy tour page. 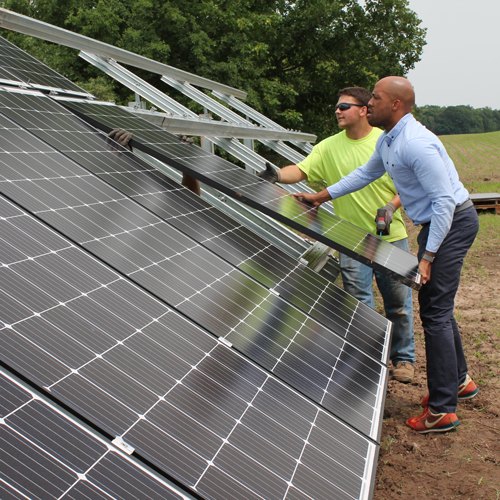