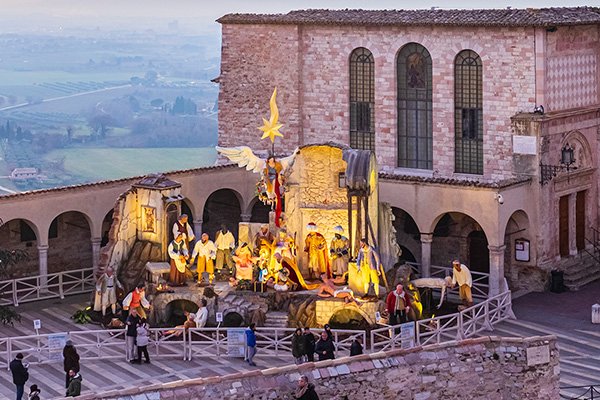 2019 NATIVITY SCENE outside the Basilica of St. Francis of Assisi
in Assisi, Italy. (iStock.com/Orietta Gaspari image)

St. Francis of Assisi brought the mystery of the Incarnation to people through a living nativity

It was Christmas Eve of 1223 in a small Italian village that St. Francis of Assisi gifted the townspeople with a precious experience of the birth of Christ. The crèche or nativity scene that has become a staple of our Christmas celebration traces its origin to that evening almost 1,000 years ago.

Greccio is situated in the Rieti Valley in central Italy. Years earlier, St. Francis had preached to the people, who responded with penance and conversion of life. In the last years of his life Francis frequented the village and stayed in a cave on land owned by his friend, John Velita. John had wanted to build a residence for him, but Francis preferred the simplicity and austerity of a cave.

In his personal spirituality and in his preaching, Francis was incarnational – that is, he saw and experienced God in creation and in all the elements of our humanity. The rolling hills and natural surroundings of Assisi and Umbria showed forth the beauty of God. Wind and clouds spoke to Francis of God’s power and majesty, and the song of the birds lifted his spirits as he raised his voice in praise of God’s wonders. In a unique way, Francis had a sense of the connectedness and unity of all created things and also a deep sense of the goodness of people. So in his preaching, Francis used concrete means to awaken faith in the lives of people.

From divinity to humility

About two weeks before Christmas, Francis had been pondering the mystery of the Incarnation and was greatly moved by the decision of the Trinity to send the Son to dwell with us. In his meditation, Francis reflected on the great love of God who chose to abandon the privilege of divinity and to dwell in the poverty and limitations of humanity – humble by birth, humble in his sufferings, and humble in his eternal presence among us.

Francis wanted the people of Greccio to share his appreciation of this mystery of the Incarnation and to understand that they should never be afraid of a God who had the face and words of a child and then a man, Jesus Christ. He wanted them to understand the wonder and the beauty of the human nature that God assumed, and has also given to each of us.

Francis asked his friend, John Velita, to put a manger filled with hay in a cave he owned on the mountain, and to bring an ox and ass there, exactly as in Bethlehem. On Christmas night Francis, the local pastor, and townspeople celebrated midnight Mass at a small altar in the cave surrounded by the Christmas scene.

Birth of Savior made tangible

When Francis finished explaining the Gospel, he took the child from the manger and held him in his arms. “Through Francis’ faith, the child seemed to come alive and the Savior’s birth was no longer distant in time and in a land never seen, but something that happened there on that mountain the people knew so well amidst the woods and meadows that every day witnessed their toil.”1

Later, the Franciscan theologian, John Duns Scotus (1266-1308) would remind us that the Word Incarnate who became the Son of Mary is the main reason why God created the universe, and that Christ would have come even if we were not in need of redemption.2

Waning daylight and plummeting temperatures these days remind us that we are quickly approaching the season of Advent – the time the Church sets aside each year for us to ponder again the mystery of the Incarnation – that God continues to live with and within us – that God so loved and valued us that he chose to share our life in all that this entails. Despite the wars and divisions and all that is unfinished in our world, we are invited again to meditate on the mystery of Jesus the Christ choosing to become human and to find in the gift of our humanity the beauty and value that God sees and loves in us.

1 Background is taken from The Franciscan Sanctuaries of the Rieti Valley by Brother Massimo Fusarelli, OFM.