‘One Mission Many Missionaries’ is complete 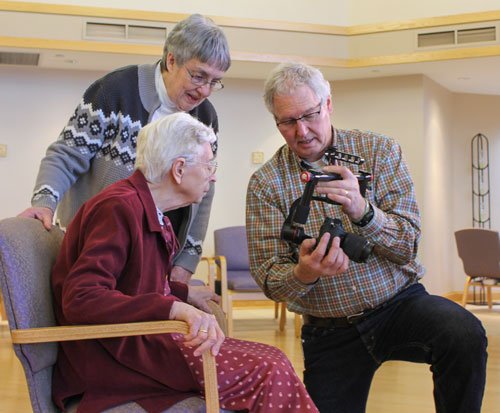 IT’S A WRAP: Sister Nancy Langlois, standing, and Sister Martin Vandervest review some footage with Dan Larson, owner of Com-Video Productions, on the final day of filming "One Mission Many Missionaries". The video may be watched at https://vimeo.com/425500310 . (Renae Bauer photo)

The dictionary defines legacy as anything of value that is handed down. The Leadership Team of the Sisters of St. Francis of the Holy Cross has for some time been considering the Community’s legacy and how best to pass on our rich heritage to future generations. One of the legacy issues discussed was that of the Community’s 90 years of ministry at The Chapel – now the Shrine of Our Lady of Good Help. The story of Adele, the vision of Mary, and Adele’s teaching the children was well documented due in large part to the work of Sister Dominica Shallow of our Community whose work for many years was “the history” of The Chapel.  However, the ministry of our Sisters at The Chapel, following the death of Adele, was not well documented.

To meet this need, it was decided to produce a video showing how the mission given to Adele was taken up by our Community through our many ministries at The Chapel: caring for the boarding school children and later the children at the Crippled Children’s Home, the high school/college for young women aspiring to religious life, the House of Prayer and the Retreat House. Renae Bauer, Communications Director, Dan Larson of Com-Video Productions and myself were charged with the task of producing the video.

Stories have a way of telling themselves. While history is a series of factual events, when combined with story, the end result is unknown until the final word is written. Such was the case with this video. In the course of the discussions, it became evident that not only had the various ministries of the Sisters at The Chapel been true to the mission given to Adele, the Great Commission of Jesus, but that their ministries before and after their time at The Chapel were also true to that same mission. A new focus for the video became apparent. It was to show how the mission given to our founder, Rev. Edward Francis Daems, OSC, and us, his followers, and the mission given to Adele were but one mission. This in turn became the title of the 54-minute video, “One Mission Many Missionaries”.

The video was shown to Sisters and Associates who gathered for Founders’ Day on March 15, 2020. Among the comments made by those who viewed the video were: