When the storytellers have passed on, who or what remembers their history?

For the Sisters, that question is answered through the ministry of archives -- the collection and preservation of letters, documents, pictures, and physical objects related to the Community’s ministries. Since 2007, Sister Agnes Fischer has served as the Community archivist, but the preservation of the Sisters’ history dates back to its founding in 1868.

Still in existence are letters, sacramentals and household items that once belonged to four of the five founders of the Sisters of St. Francis of the Holy Cross. Their articles bring to life the reality and challenges of ministering to immigrant families in the newly formed state of Wisconsin. Life in the desolate wilderness was hard, and Father Daems often served the people as priest, herbal healer, postmaster, legal consultant, and briefly as a foster parent. The founding Sisters prayed, taught, farmed, and assisted Father Daems wherever and however needed.

But these tangible items that tell part of the Community’s story don’t stay locked away, unseen, in a climate-controlled room. Sister Agnes finds creative ways to display photos, sacramentals, books and so on. About once a month she unveils a new display in the Heritage Room at St. Francis Convent. Displays have included Father Daems’ belongings, the Sisters’ immigrant roots, the Sisters’ religious dress through the years, the Peshtigo Fire, and the Shrine in Champion.

“The Sisters appreciated the Peshtigo Fire display because Father Daems was involved in it. He dreamt about the fire before it ever happened,” says Sister Agnes. “Then there’s the Chapel,” she adds.

The Chapel -- now known as the Shrine of Our Lady of Good Help in Champion – is dear to the Sisters, many of whom lived and/or ministered there while the Sisters operated it from 1902 to 1992. Chapel-related displays have included the Sisters’ role in the Aug. 15 processions as well as staffing and operating the Home for Crippled Children, the Sisters’ pre-novitiate (girls’ high school), and the retreat center/house of prayer. “There is an emotional connection to the Chapel,” Sister adds. “I enjoy helping the Sisters remember and appreciate the beauty of our history.”

On the shoulders of others

Sister Agnes credits her predecessors for retaining and preserving materials that are enjoyed today. “Sister Dominica Shallow (1898-1966) was probably the first archivist without having the title and after her it was probably Sister Damien Dirienzo (1920-1999)” both of whom served as librarians for the community, says Sister Agnes. “Sister Dominica was the one who organized the archives in the context of the library. She was also the one who wrote the book on the Chapel,” first published in 1943, she adds.

Even though Sister Agnes didn’t have an archiving background before she accepted this role, she says her lifelong teaching ministry has helped her as well as her love of history.

“I was always interested in history; in fact, that was my minor in college,” she says. “I’ve always liked history, and for my last year of teaching I taught social studies.”

Additional training and belonging to the professional organization named Archivists Conference of Women Religious (ACWR) have helped Sister grow in skills and knowledge.

“These (ACWR) people know what they’re doing,” she says. “A lot of these new archivists working for (religious) communities are people with degrees in library science and archival science. They are not Sisters. They’re young men and women, professional archivists who are hired by these communities, so I have benefitted from their professional knowledge and help.”

What speaks to mission

As Sister Agnes receives, logs and stores materials, she considers to what degree each item speaks to the Sisters’ charism, or unique spiritual gift. “We have been teachers and innovators in the line of education,” says Sister. “One of the things that we say about ourselves is we respond to the needs of the times in whatever way we could,” so when there was a need for summer vacation Bible teachers, a few Sisters were sent. When, in the 1960s, the Holy Father Pope Paul VI asked America’s religious communities to share members with the Church in Latin America, a few Sisters were sent. And when there were needs for nurses, social workers, and chaplains, a few Sisters were sent.

“Who we are, what we have done and what we are doing has had an influence on our local church and local society and the world,” says Sister Agnes. It’s a history worth remembering. 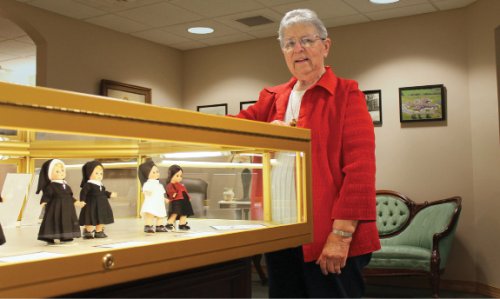 HISTORY MATTERS:  Sister Agnes Fischer manages the Community’s archives and shares the materials with Sisters and visitors through displays, such as this one about the Sisters’ habit through the years. (Renae Bauer photo)