In the summer of 1981, more than 113 years after the founding of the Sisters of St. Francis of the Holy Cross and nearly 16 years since the conclusion of the Second Vatican Council, the Sisters voted during their General Chapter to enter uncharted waters: To invite lay people into this particular Franciscan spirit, prayer and mission.

The significance of this decision is still fresh in the mind of Sister Joanne Goessl, who was asked after the vote to research and develop a framework for what is known today as the Associate Relationship. As she describes it, Vatican II called for a spiritual renewal of the church. “There were some key facets we Sisters grabbed on to in the beginning; that we are all called to build the Kingdom, and that call comes from our baptism,” she says.

With 50+ years in the rearview mirror it’s worth remembering who was responsible for the Church’s mission prior to Vatican II.

“Prior to the 1970s, sisters and priests had a very specific role in the church, and they were the ones who did the mission of the church, primarily,” says Sister Francis Bangert. “By the time we get to the 1980s that began to switch and we were beginning to look at the laity and the gifts they have and how to empower those gifts.”

The critical question was how?

Where was the Holy Spirit leading?

Like many religious communities at that time, the Sisters felt a prompting from the Holy Spirit but were unsure of how to proceed.

What began to emerge were three models of Associate relationships – prayer partners, ministry partners, and lay people who lived in community with religious women or men. “I thought the best way to start was with the prayer relationship,” says Sister Joanne. “Then, of course, who were the people who were asking for this?” As the full-time coordinator of religion for two parishes, Sister Joanne was quite steeped in the workings of parish life and the Rite of Christian Initiation for Adults (RCIA), which is the Church’s process for forming and welcoming adults to the Catholic faith. The RCIA process became significant for initiating lay persons into Associate Relationship and is still used today.

“I was convinced that there were people in the parish who are being called to deeper holiness but couldn’t get that in their parishes,” she says. The Associate Relationship could provide them with “spiritual nourishment to deepen their lives so that they could better minister back at their home parish or wherever that call came to be.”

With a firm sense of direction, Sister Joanne became the Community’s first director of the Associate Relationship, and the Community welcomed its first Prayer Associates in May 1984. “The first Associates actually came through relationship with the Sisters, which I think is what happens today,” Sister explains.

As Prayer Associates the six women were committed to praying for the Sisters and their various ministries, and the Sisters prayed for the Associates, says Sister Francis, who succeeded Sister Joanne as Associate Director in 1987.

Living out a new prayer life

“But then those women said, ‘We want to do more than pray. We want to rub shoulders with the Sisters, so how can we do that?’” Sister Fran explains. Gradually, the Prayer Associates became active Associates, embracing the unique spirit of this Franciscan community. They’ve helped the Sisters at their bazaars, on committees, in the motherhouse garden and orchard, and at Wellspring, the Community’s daytime shelter outreach to women on Green Bay’s west side, to name a few.

“A highlight for me was sharing faith and recognizing that we’re all on the same journey to our one God, sharing the joys and the sorrows of life,” says Sister Francis.

During her 22 years as Associate Director, Sister Francis and her team consisting of herself, another Sister and one Associate welcomed 44 people to the Associate Relationship including the first married couple in 1990. Today nine couples are Associates. Among them are Rose and Frank Vandersteen of Green Bay who became Associates in 1995 at the invitation of Sister Germaine Paider. Rose says they were humbled to be asked and are thankful they were. “My faith has grown immensely. My prayer life has definitely grown by being an Associate, by learning from the Sisters about their prayer life and what they do.”

In 2009, Sister Francis passed the baton to Sister Marilyn Herr who had been serving on the Associates’ advisory committee and 25th anniversary committee. Sister Marilyn says she accepted then-Community President Donna Koch’s invitation to be the next Associate Director because she liked the idea of a challenge. “There was a big learning curve that I underwent: What does it mean to have an Associate Relationship?” asks Sister Marilyn. “I am glad I had the background as a teacher, as a principal and as a hospital chaplain. All of those combined beautifully for me to go on and develop the Associate Relationship further. And I learned as much as I was giving because I had to verbalize it, write about it, promote it, inspire others. I gained a greater understanding and a greater practice of Franciscan spirituality within myself.”

“As Associates they are in relationship with the Sisters and with other Associates. That forms community. They’re helping each other,” says Sister Marilyn. “And they are plunged into the parish life in a different way. They’re very active in their parishes as Eucharistic ministers, lectures, ushers, choir members, educators, parish committee members. They are different parishioners because of this. It can’t be helped.”

And the Sisters are changed because of the Associate Relationship, too. “The beautiful thing is that I know what this relationship has done for Associates, and I know what it has done for us Sisters,” says Sister Joanne. “People’s spiritual lives have been deepened. I know a key part has been our mutual relationships. Through prayer, discussion groups and working together, it’s been a win-win relationship.” 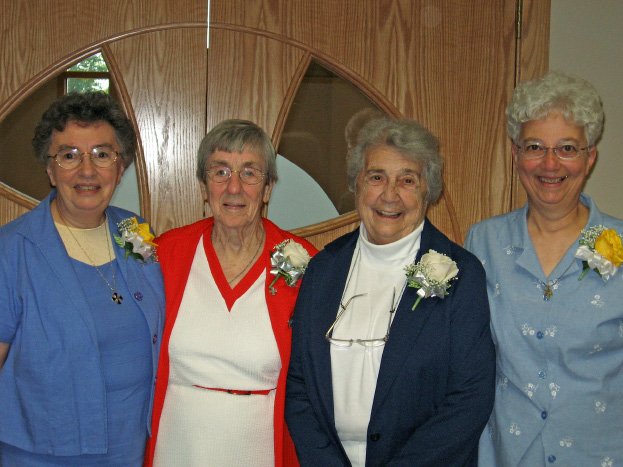 AT THE 25th ANNIVERSARY CELEBRATION   for the    Associate Relationship, Sister Joanne Goessl, left, celebrated   with Associates Loretta Dyer and Muriel DeNamur, who   were among the first to enter. Sister Francis Bangert, right, was the second director. 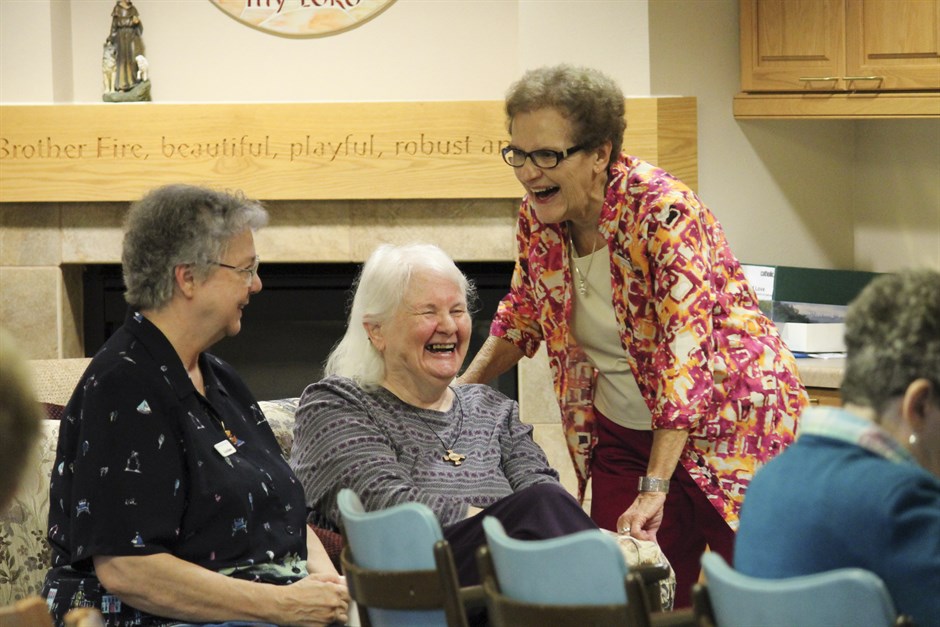 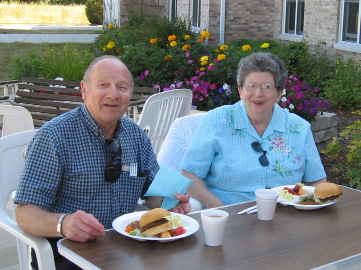 DON AND LAURIE RETTMANN  were the second couple to enter the Associate Relationship. They did so in 1991, one year after Elly and Francis LeRoy. 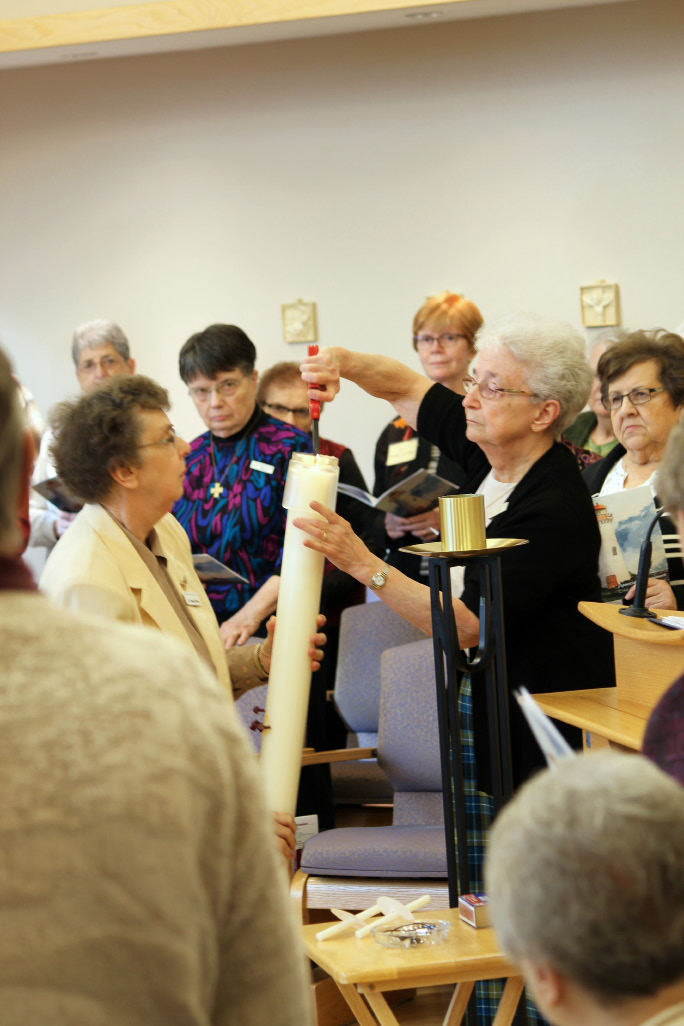 SISTER MARILYN HERR, right, lights the Easter candle at the beginning of this year’s prayer service welcoming two new Associates and celebrating the renewal of two. She served as the Director of  Associates from 2009 to Nov. 16, 2018. Assisting her with the candle and in office duties is Sister Christine Wochos. (Renae Bauer photo)