Day: ‘I firmly believe our salvation depends on the poor’

Both were flawed. Both were imperfect. Both were converts to Catholicism. And both have had a huge impact in the U.S. and around the world.

Dorothy Day (1897-1980) and Trappist Father Thomas Merton (1915-1968) shared these and other characteristics. Both were prolific writers of their generations, and both studied and applied Catholic social teaching as they worked for peace and justice on behalf of the poor.

These were the observations of Tony Pichler, the speaker for the November gathering of Associates. Pichler says these two modern-day icons of the Catholic Church have inspired him to work for social justice in the Green Bay area specifically in the formation of St. John the Evangelist Homeless Shelter and the Micah Center, a daytime drop-in center.

Imperfect Disciples
Pichler’s talk, titled “Models of Our Faith,” focused on the complexities of Day and Merton and how their sins and shortcomings didn’t stop them from doing Gospel work.

For example, both of Day’s pregnancies were out of wedlock. She ended her first pregnancy when the father said he would not acknowledge the child. Her profound regret later compelled her to convert to Catholicism in 1927; however, this decision created a rift between Day and her then-common law husband, Forster Batterham, who left Day and their daughter, Tamar.

Undeterred, this single mom forged ahead and worked for social movements. She developed a friendship with Peter Maurin, who shared with Day the Church’s social teachings, beginning with Works of Mercy and the Church’s first modern social encyclical, “Rerum Novarum,” written by Pope Leo XIII. Together, in 1933, they began a Catholic newspaper called The Catholic Worker for which Day wrote regularly. By the time of her death, Day had written 1,500 articles and six books.

In 1936, Day and Maurin founded the first Catholic Worker house, a place of hospitality for the hungry and homeless. The focus was on “Imago Dei” -- each person is created in the image of God. Maurin chose this approach based on two early theologians: St. Basil the Great who wrote, “The coat that hangs in your closet belongs to the poor,” and St. Jerome who is believed to have coined the phrase, “Christ Room,” a reference to reserving space in every home for someone in need.

But serving people and writing columns didn’t consume Day’s life, says Pichler. Day strived to live her waking hours in thirds -- one-third for prayer including daily Mass, one-third for studies and meditation, and one-third for the care of others and the business of life.

Pichler says Day encountered the divine in the midst of her daily activities. She recognized that her work was an expression of her resistance to the false boundaries created between human beings, God and the world.

Fr. Thomas Merton
While Day and Maurin were starting The Catholic Worker Movement during the Great Depression, Thomas Merton was studying -- and carousing -- at the University of Cambridge in England. It’s believed that rumors of his fathering a child prompted his transfer to Columbia University in New York in 1935.

While studying philosophy, Merton became intrigued with Catholicism and pursued baptism in 1938. In another three years Merton began his formation as a Cistercian monk at the Abbey of Our Lady of Gethsemani in Kentucky. This austere lifestyle stood in sharp contrast to his college years and left many of his friends bewildered.

But rather than leading a life of anonymity at the abbey, Merton was asked to write his autobiography, “The Seven Storey Mountain,” which sold 60,000 copies the first year.

Eventually, Merton became interested in Asian religions and believed in promoting interreligious dialogue. This, as well as his concern for civil rights, the nuclear arms race, contemplative prayer and monastic spirituality resulted in hundreds of poems and articles and 60 books.

Even though monastic life involves separating oneself from the world, Merton saw himself deeply connected to humanity. Pichler pointed to Merton’s famous “4th and Walnut Streets” revelation, written on March 18,1959, while in Louisville:

“On the corner of 4th and Walnut streets: I was suddenly overwhelmed with the realization that I loved all those people, that they were mine and I theirs, that we could not be alien to one another even though we were total strangers. ... There is no way of telling people that they are all walking around shining like the sun.”

The lessson of Day’s and Merton’s lives was summed up with a clip of Fr. James Martin, SJ, who described Merton as sinful, flawed and still holy. “I like to think that this is how God looks at us,” Martin says. 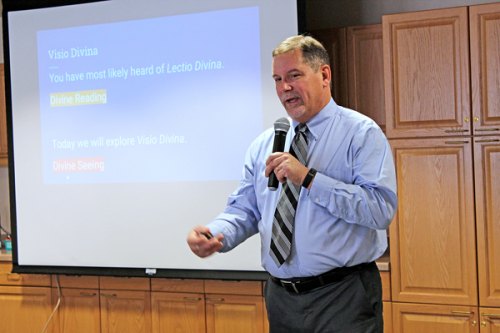 TONY PICHLER, director of the Norbertine Center for Spirituality in De Pere, began his presentation with a Visio Divina, or “divine seeing,” a prayer practice in which the person contemplates an image. (Renae Bauer photo)