Lent: A call to adore 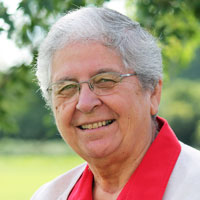 This winter, after the Christmas decorations were removed from our church and we settled into Ordinary Time, something new appeared in the sanctuary. I noticed that the sanctuary lamp, which had previously stood right next to the tabernacle, had been fastened to the wall and now hung slightly higher than the tabernacle. On either side of the tabernacle was a tall, narrow pedestal with an angel mounted on it, bowing in adoration. The scene immediately brought to mind the picture of the Holy of Holies in King Solomon’s Temple, with the two angels kneeling on top of the Ark of the Covenant, facing each other as they knelt to worship the God Whom the people believed dwelt between them. The view before me and the memory from the Old Testament were an invitation to me to enter into a deeper awareness of the awesomeness of the holy place before which I stood.

Within the last couple of years I have read two books by two different authors, in which each one states that in our contemporary society we are greatly lacking in one thing: We have lost the ability to adore.

Every year at the beginning of Lent the Church presents us with the account of Jesus enduring temptations during His time of solitude in the desert. If only He would turn stones into bread and satisfy the people’s physical hunger, if only He would do some extravagant deed like jumping off the Temple to impress the crowd, if only He would compromise His values and worship Satan, then He would inherit great power and the people would have unquestioning belief. Jesus responds with answers that indicate that God alone is to be the center of our lives. We are to listen to His Word, to serve Him devoutly, and to bow before Him in humble adoration.

Maybe this Lent, as we enter our churches, we ought to pause for a few moments and just gaze upon the sanctuary. Mindful of our call to come before our God in a spirit of worship, may we discover who we are.

Lent: A call to adore