Creating a new experience of the Stations of the Cross

How is the Holy Spirit calling you to pray?

Twelve years ago, as the Sisters were preparing to move from their old motherhouse on Bay Settlement Road to the new motherhouse on Nicolet Drive, Sister Bridget Stumpf realized something: The days of walking next door to Holy Cross Church to pray the Stations of the Cross were dwindling.

While the chapel at the new motherhouse has Stations, Sister Bridget has a history with the ones at the church.

“In 1947 I came to the convent and the parish was installing the Stations,” she recalls. The thought of losing easy access to the paintings prompted Sister Bridget to ask Sister Mary Kabat to photograph each station so she could continue to pray with them.

Originally on a CD, the pictures are now formatted into a photo album and accompanied by reflections and prayers.

“I might not pray all of it; I might open it up to one page and use it as a meditation,” says Sister. “I like to look at the figure of Christ in different positions or the bystanders. Look at the angry faces or the sympathetic faces. Follow a character. Just look at them and say a prayer. As you study them you see different things.”

In addition to the parish’s Stations of the Cross, Sister Bridget’s collection includes a series of images published years ago in St. Anthony Messenger magazine as well as cards featuring American impressionist Ettore DeGrazia’s interpretation of the Stations, which she discovered in the old motherhouse library before the move. She adds that there are several good video versions of the Stations online including the one prayed by Pope Francis at the 2016 World Youth Day. It includes a corporal or spiritual work of mercy at each station (available on YouTube at https://youtu.be/uP_EKUDxp2w).

Sister Bridget emphasizes that her book is not the outcome of a formal creative process that she learned somewhere but rather an expression of a personal journey. She thinks others could create something similar as long as the focus is on Jesus.

“It should help you look at the suffering and the love of Jesus and the suffering in your own life. It teaches you compassion for other people who are suffering. No one is exempt from suffering, even Jesus and Mary.” 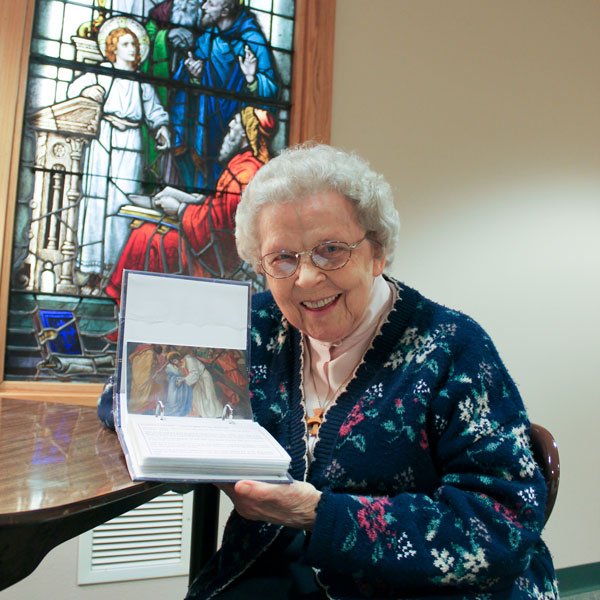 SISTER BRIDGET STUMPF created a book depicting the Stations of the Cross at Holy Cross Parish in Green Bay. The photos, taken by Sister Mary Kabat, are paired with prayers. (Renae Bauer photo)